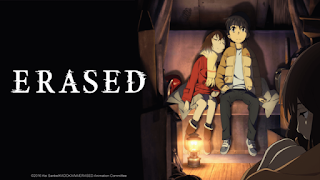 Summary: Growing up, 28 year old Satoru has always suffered from "revivals" where he will jump back in time 1-5 minutes and have to fix some tragedy. After a series of events, his revival takes him all the way back to his 10 year old self. Through this, he takes it upon himself to solve a series of kidnapping/murders that occurred in his town.

Disclaimer: I have only read the first volume or so of the manga, but I've watched the anime in its entirety.

Review: This series gave me so many feelings. First of all, let's talk about the characters. Satoru was an interesting guy and I appreciated how the revivals were already a part of his life before the story initially begins. It gives us an idea of what kind of person Satoru is without being an info-dump about revivals. I can't talk about specific side characters without feeling like I'm going to spoil certain aspects of the story, but most of the characters felt thoroughly explored and fleshed out. I will say, some of the kids 10 year old Satoru interacts with feel a bit more mature than I would have expected, but overall this didn't pull my attention away from the story.

Now, for the actual story. The story in Erased was absolutely beautiful. There were so many heartbreaking and encouraging moments for the adult characters as well as the children characters. Of course, it wasn't perfect. On a personal note, I sometimes have a hard time with stories about people trying to fix mistakes and save another person's life. That being said, I enjoyed that this story had a thriller aspect to it, versus a strictly sappy storyline. One thing that I'm torn on was the length of the story.  When Satoru goes back to his 10 year old self, we find out there were 3 children who were kidnapped and murdered in his town. A large part of the anime's story focused on only one of these children. Part of me wishes they gave the other 2 children a bit more of a story. That being said, I'm not exactly sure how they would have been able to pull that off without the story becoming repetitive. That was probably my biggest gripe throughout the series, but it didn't diminish how much I loved the show. I will also add that I found the ending a bit predictable. I'm curious to see if other people were blown away by it, but I saw the ending coming from the start. Still, I would highly recommend this for anyone. It's short enough so, if a person doesn't frequently watch anime, they will not be intimidated. It's also griping so anime veterans will have an enjoyable time following along with this story.

Additional: Have a video of AmaLee singing an English translation of the ending and opening songs from Erased.