Bran Hambric the Farfield Curse by Kaleb Nation
Synopsis: In a bustling metropolis where magic is outlawed, a six-year-old child is found inside a locked bank vault. A scrap of paper reveals his name: Bran Hambric. The child remembers nothing of his life before the vault. Only magic could have done this. But why would any mage risk breaking the law to place a child in a bank vault?
Eight years later the City of Dunce has forgotten about Bran. Even his foster parents don't seem to know he exists. But there are those who have been watching, biding their time, waiting to strike, people who know where Bran came from and why he was sent away. And they will do anything to get Bran back, dead or alive…

Welcome to a world unlike any other where the adventure of a lifetime is just beginning. (Goodreads)

Percy Jackson and the Olympians: The Lightning Thief by Rick Riordan
Synopsis: Percy Jackson is about to be kicked out of boarding school...again. And that's the least of his troubles. Lately, mythological monsters and the gods of Mount Olympus seem to be walking straight out of the pages of Percy's Greek mythology textbook and into his life. And worse, he's angered a few of them. Zeus's master lightning bolt has been stolen, and Percy is the prime suspect.

Now Percy and his friends have just ten days to find and return Zeus's stolen property and bring peace to a warring Mount Olympus. But to succeed on his quest, Percy will have to do more than catch the true thief: he must come to terms with the father who abandoned him; solve the riddle of the Oracle, which warns him of betrayal by a friend; and unravel a treachery more powerful than the gods themselves. (Goodreads) 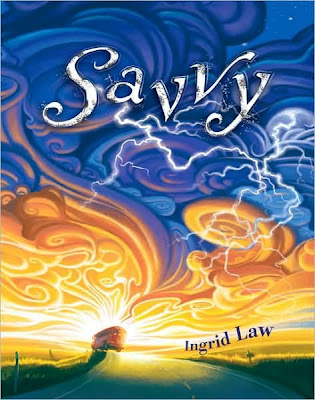 Savvy by Ingrid Law
Synopsis: For generations, the Beaumont family has harbored a magical secret. They each possess a "savvy"--a special supernatural power that strikes when they turn thirteen. Grandpa Bomba moves mountains, her older brothers create hurricanes and spark electricity . . . and now it's the eve of Mibs's big day.

As if waiting weren't hard enough, the family gets scary news two days before Mibs's birthday: Poppa has been in a terrible accident. Mibs develops the singular mission to get to the hospital and prove that her new power can save her dad. So she sneaks onto a salesman's bus . . . only to find the bus heading in the opposite direction. Suddenly Mibs finds herself on an unforgettable odyssey that will force her to make sense of growing up--and of other people, who might also have a few secrets hidden just beneath the skin.

Kim said…
I haven't read Lightning Thief yet, but I really wanted to so I bought the book.
And I bought Bran because it sounds good and I watch Kaleb's videos on youtube.
April 8, 2010 at 5:04 PM