April 23, 2010
I'm doing 2 reviews for this post because they will both be pretty short and I'm a bit behind so I wanted to get them out of the way. 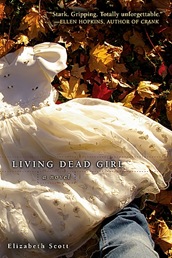 Synopsis: "Once upon a time I was a little girl who disappeared. Once upon a time my name was not Alice. Once upon a time I didn't know how lucky I was." When Alice was ten, Ray took her away from her family, her friends -- her life. She learned to give up all power, to endure all pain. She waited for the nightmare to be over. Now Alice is fifteen and Ray still has her, but he speaks more and more of her death. He does not know it is what she longs for. She does not know he has something more terrifying than death in mind for her. This is Alice's story. It is one you have never heard, and one you will never, ever forget.

Review: Words can't really describe the way I feel about this book. It was gripping, beautiful, intense, depressing. and heartbreaking all at one time. I think everyone should go and read this so they can get their own feel of Alice's pain.

Synopsis: *Is Edward a romantic or a (really hot) sociopath? * How is the Twilight series just like one of Shakespeare's tragedies? * Who would you rather date: the guy who thirsts for your blood, or the guy who drinks out of the toilet? You can't read Stephenie Meyer's Twilight series without wanting more- more romance, more suspense, just more of Bella, Edward, Jacob, and the rest of Forks, Washington. You aren't alone. Join some of your favorite writers as they look at the series with fresh eyes, and fall in love with Bella and Edward, and their world, all over again. Find out: * How the literary vampire went from horror show to heartthrob * Other Native American wolf myths, and how the Quileute werewolves compare * What Bella and Edward's romance has to say about free will * Why vampires and werewolves really shouldn't date, and what that has to do with Edward's insistence that Bella go to prom With Essays From... * Robin Brande * Rachel Caine * Cassandra Clare * Rosemary Clement-Moore * Linda Gerber * Cara Lockwood * Megan McCafferty * K. A. Nuzum * James Owen * Janette Rallison * Ellen Steiber * Anne Usru

Review: I bought this book because I thought it would only be fair to read what authors have to say about Twilight even though I don't like it so this was a new experience. The big difference between reading the opinions of adults and reading the opinions of teenagers is the fact that even though the adults might like the book they still recognize the flaws in the characters and in the story. It doesn't matter if you're a fan or not this is one book that I think everyone who has ever read the books should read. Though I should probably mention that this book was published before Breaking Dawn was published so I kind of want to read a follow up book with the same people now that book 4 has been released. These essays haven't changed my opinion about Twilight in the slightest (the sad thing is as I'm typing this I'm watching Oprah because there is nothing else on and Dakota Fanning is talking about Eclipse and she made the comment that she never met someone that isn't a fan of the series).

You should all check out both of these books because they both got 5/5 from me.