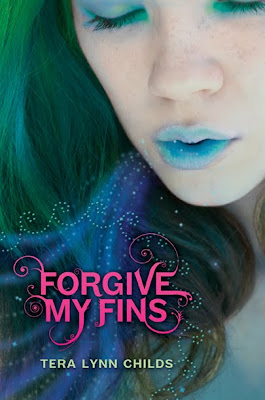 Summary: Lily Sanderson has a secret, and it’s not that she has a huge crush on gorgeous swimming god Brody Bennett, who makes her heart beat flipper-fast. Unrequited love is hard enough when you’re a normal teenage girl, but when you’re half human, half mermaid like Lily, there’s no such thing as a simple crush.

Lily’s mermaid identity is a secret that can’t get out, since she’s not just any mermaid – she’s a Thalassinian princess. When Lily found out three years ago that her mother was actually a human, she finally realized why she didn’t feel quite at home in Thalassinia, and she’s been living on land and going to Seaview high school ever since, hoping to find where she truly belongs. Sure, land has its problems – like her obnoxious, biker boy neighbor Quince Fletcher – but it has that one major perk – Brody. The problem is, mermaids aren’t really the casual dating type – when they “bond,” it’s for life.

When Lily’s attempt to win Brody’s love leads to a tsunami-sized case of mistaken identity, she is in for a tidal wave of relationship drama, and she finds out, quick as a tailfin flick, that happily-ever-after never sails quite as smoothly as you planned.
Review: This was a really cute book and I will definitely go check out Tera's other books now after reading this one. The world was so cool, and I loved the sea slang that Lily used throughout the book. I thought Lily was an annoying character for the most part. She made me think of Ariel a bit with her fascination with humans. She just sounded like a broken record when it came to her mermate. The ending was okay, and it really sets up for a second book so I'm waiting for it. I wouldn't recommend this book to someone who needs action to keep them interested, but I would recommend this to someone who wants to read a cute book on mermaids.
4/5
4 Forgive My Fins Tera Lynn Childs