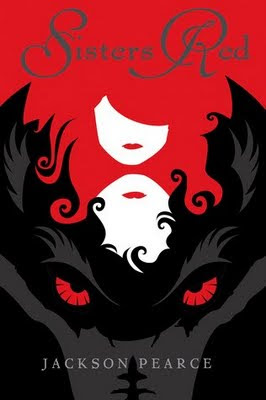 Summary: Scarlett March lives to hunt the Fenris-- the werewolves that took her eye when she was defending her sister Rosie from a brutal attack. Armed with a razor-sharp hatchet and blood-red cloak, Scarlett is an expert at luring and slaying the wolves. She's determined to protect other young girls from a grisly death, and her raging heart will not rest until every single wolf is dead.

Rosie March once felt her bond with her sister was unbreakable. Owing Scarlett her life, Rosie hunts fiercely alongside her. Now Rosie dreams of a life beyond the wolves and finds herself drawn to Silas, a young woodsman who is deadly with an ax-- but loving him means betraying her sister and has the potential to destroy all they've worked for.
Review: I loved all of the characters in this book. They were all really strong and wonderful, and yet you still felt a certain sadness for all of them. Something I had to get used to was how Jackson used the name "Fenris". This is the second book that I've heard that name (the first was The Sight/Fell by David Clement-Davies) and I knew of Fenris as a Norse god. After a couple of chapters though my head got around that and it was fine. I thought the ending was really good. I think it showed the readers more of how Rosie's and Scarlett's heart beat as one.
5/5
5 Jackson Pearce Sisters Red