Guardian of the Gate by Michelle Zink 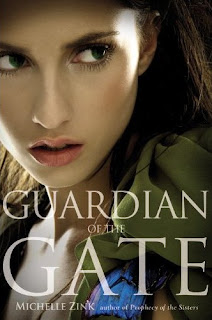 Summary: The ultimate battle between sisters is nearing, and its outcome could have catastrophic consequences. As sixteen year-old Lia Milthorpe searches for a way to end the prophecy, her twin sister Alice hones the skills she'll need to defeat Lia. Alice will stop at nothing to reclaim her sister's role in the prophecy, and that's not the only thing she wants: There's also Lia's boyfriend James.

Lia and Alice always knew the Prophecy would turn those closest to them against them. But they didn't know what betrayal could lead them to do. In the end, only one sister will be left standing.
Review: I have been waiting for so long for this book, and I was so happy when I finally got it. Lia is still a great heroine because she knows what needs to be done, and she's willing to do it. The part about Sonia and Luisa was a bit predictable, but it was still a great addition to the story. I really like Dimitri. I think if Lia goes back with James I would be very upset because he is a very useless character. I really hope that Michelle writes a companion novel(s) that cover Philip's search for the other 2 keys. I think that would be pretty interesting.
5 howls
5 howls Guardian of the Gate Michelle Zink