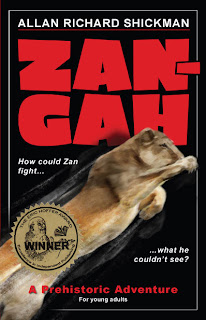 Summary: The hero, Zan-Gah seeks his lost twin in a savage prehistoric world, encountering suffering, captivity, conflict, love, and triumph. In three years, Zan-Gah passes from an uncertain boyhood to a tried and proven manhood and a position of leadership among his people. Themes: survival, cultures, gender roles, psychological trauma, nature's wonders and terrors.
Review: I didn't really know what to think about this book. "A Prehistoric Adventure"? So there's a bunch of cavemen running around? *shrugs* Well this was actually a pretty good story. I really liked Zan, and how, while you were on his journey, you got to learn some survival skills. I though this was a good coming of age story that many can enjoy. What annoyed me a lot though was that you didn't really know the names of any tribes except for the Hru. all the others are known as "the wasp people" and "Zan's clan". Maybe in the second book you can learn more about the clans which would be really nice.
4 howls Allan Richard Shickman Zan-Gah