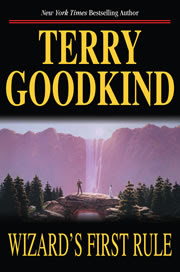 Summary: Wizard's First Rule marks the debut of a new fantasy writer. Truly epic in scope and filled with burning intensity, it is the story of Richard Cypher, a modest woodsman in a world achingly beautiful, alive with the joys of nature: a world the reader comes to love as fiercely as do Richard and those around him. Though a mere woodsman, he is the one destined to battle the ultimate adversary - Darken Rahl, an evil mage who bids to destroy all that Richard holds good and beautiful, dooming him and the rest of the people of Westland to a living Hell of subjugation and degradation.
Review: This book was simply amazing. I haven't really read a lot of Fantasy books, but this one took me on a wonderful journey. I barely thought about it being 820 pages because I was so in love with all of the characters. I had part of the end figured out, but it was still a very enjoyable story.
5 howls
5 howls Terry Goodkind Wizard's First Rule