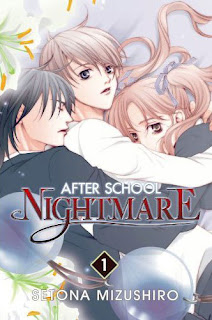 Summary: You have just awakened to find your darkest, ugliest secret revealed to classmates who would do anything to destroy you. This is what's happened to Ichijou Mashiro, whose elite school education turns into the most horrifying experience of his life when he's enlisted by a mysterious school nurse to take an after-hours class. Only those who pass the class will graduate, and the only way for Mashiro to pass is to enter into a nightmare world... where his body and soul will be at the mercy of his worst enemies. Can Mashiro keep his life-long secret - that he is not truly a "he" nor entirely a "she" - or will he finally be "outted" in the most humiliating way possible?
Review: It's always refreshing to discover a new manga series with incredible artwork, but it's even better when the story is interesting too. I love this idea and the characters are all very dark. As far as romance goes there are 2 very different options for Mashiro. Kureha is a student who is undergoing the same special class as Mashiro. She has a very dark past, but a promising future. Sou is another student in the same program as Mashiro and Kureha, but he takes it to the extreme. I'm curious to see what is in his past, and I want to know more about his sister. Maybe I just like the darker manga, but I found this volume to be visually stunning as well as deep in the nature of the story. I believe it's only 10 volumes so if I can find the others I will be sure to pick them up. 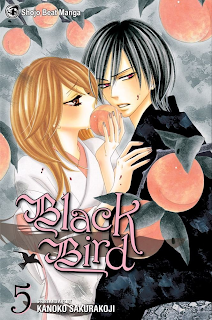 Summary: There is a world of myth and magic that intersects ours, and only a special few can see it. Misao Harada is one such person, and she wants nothing to do with magical realms. She just wants to have a normal high school life and maybe get a boyfriend. But she is the bride of demon prophecy, and her blood grants incredible powers, her flesh immortality. Now the demon realm is fighting over the right to her hand...or her life!

Misao thinks she's come to terms with being the bride of prophecy and dating a tengu lord, but is she ready to bear her handsome demon an heir?! Kyo's grandfather is impatient to secure the power of the prophecy and the line of succession, and he doesn't care which of his grandsons fathers Misao's baby. If Kyo doesn't act fast, he'll lose Misao and the leadership of the clan. But despite his desire for Misao, Kyo is hesitant to consummate their relationship, for that will bring about catastrophe...

Review: I really like this series, and every volume I read keeps reminding me why. I'm not big on how forceful Kyo is, but he never pushes Misao further than she's willing to go. The story itself is great and the art is just stunning. I cannot wait until Volume 6 is released in America so I can get my hands on that one. I've been borrowing them from a friend, but I really need to get copies of this fantastic series for myself.

Both volumes get 5 howls from me!