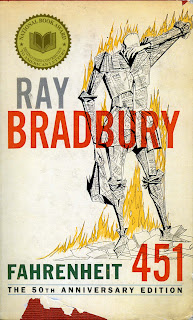 Summary: Guy Montag was a fireman whose job it was to start fires. And he enjoyed his job. He had been a fireman for ten years, and he had never questioned the pleasure of the midnight runs or the joy of watching pages consumed by flames, never questioned anything until he met a seventeen-year-old girl who told him of a past when people were not afraid. Then Guy met a professor who told him of a future in which people could think. And Guy Montag suddenly realized what he had to do...
Review: This is one of those books I wish I knew about before hand so I could read it earlier in my life. This is a great book and I will definitely have to re-read it again. Clarisse is my favorite character. She is so fun and light. In a world where books get destroyed and people are living in fear, she is a nice little addition. Guy was a sad character, but I liked him. He fooled himself into thinking his life was right, but his world gets shattered. The hounds were scary. They really were. The idea of banning books is hard enough to deal with. Burning books? I hope I never live in a society that believes doing that is okay, because it is NEVER okay. Here are some quotes I was rather fond of:
"Books were only one type of receptacle where we stored a lot of things we were afraid we might forget. There is nothing magical about them at all. The magic is only in what books say, how they stitched the patches of the universe together into one garment for us."
"So now do you see why books are hated and feared? They show the pores in the face of life. The comfortable people only want wax moon faces, poreless, hairless, expressionless."
"What traitors books can be! You think they're backing you up, and they turn on you. Others can use them, too, and there you are, lost in the middle of the moor, in a great welter of nouns and verbs and adjectives."
This book undoubtedly gets 5 howls out of me. Short, emotional read. Absolutely loved it.
5 howls Fahrenheit 451 Ray Bradbury

Kim said…
I've had it for a little while. I figured Banned Books Week was probably the best time for me to read it. It was really good.
October 2, 2011 at 2:52 PM