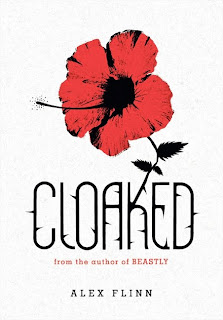 Summary: I'm not your average hero. I actually wasn't your average anything. Just a poor guy working an after-school job at a South Beach shoe repair shop to help his mom make ends meet. But a little magic changed it all.

It all started with a curse. And a frognapping. And one hot-looking princess, who asked me to lead a rescue mission.

There wasn't a fairy godmother or any of that. And even though I fell in love along the way, what happened to me is unlike any fairy tale I've ever heard. Before I knew it, I was spying with a flock of enchanted swans, talking (yes, talking!) to a fox named Todd, and nearly trampled by giants in the Everglades.

Don't believe me? I didn't believe it either. But you'll see. Because I knew it all was true, the second I got cloaked.

Review: I like Alex Flinn's books. I can't wait to read what else she has to give us. Granted, I've only read a few of her books. Cloaked was really good. Not my favorite. I think Beastly is still my favorite for now, but Cloaked was really good. I kind of liked Johnny as a character, but Meg was more likable in my opinion. I don't know how I feel about everyone accepting magic as easily in this book. In Beastly and A Kiss in Time, the characters still hid what they did and how they did it because they knew that no one would believe them. At the same time, it helps the story progress much faster so I didn't get too bogged down by it. I was confused when I first picked up this book though. The title makes me think of Little Red Riding Hood. Maybe it's just me, but I thought this was going to be a re-vamped version of Red's story. I was in no way disappointed though. I thought the story was interesting and the characters were likable. Even Ryan, the jerky "friend" of Johnny's. I'm not quite sure they really were friends, but that's just me. Magic was a more obvious focus of this book but, in the other two books I read, it was just love breaking a spell. Witches helped and hurt Johnny as he tried to fulfill his quest. Another great story from Alex's brilliant mind.

Anonymous said…
I have to agree with you about Beastly being my fav. But I cant wait to read the other books Alex Flinn has written. Thanks for the revew it will help me make up my mind in what book to get next.
October 14, 2011 at 8:27 AM