To Tempt the Wolf by Terry Spear 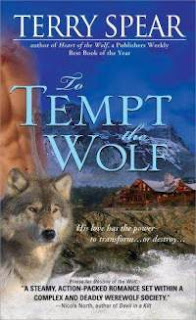 Summary: In this third in the series, wildlife photographer Tessa Anderson must prove her brother innocent of murder charges. But when she discovers a gorgeous naked man barely alive on her beach, she's got a new world of troubles to deal with, not least of which is how he affects her with just a look, a touch, or a whispered word.

Hunter Greymore is a lupus garou, a grey werewolf. Hoping to keep a low profile at Tessa's cabin on the coast, he's drawn into her life—and into her bed. His animal instincts war with his human half, but in the end, the only thing he can do about this fascinating, adorable woman is to leave her forever —unless she becomes one of them.

Review: Oh Hunter was dreamy! Dev is still my favorite male, but Hunter was pretty darn close. And I liked Tessa a lot as a female. She seemed pretty strong and clear-headed which is always nice when you're reading about the mate of an alpha. I thought Meara was interesting too. I would be curious to read her story if she gets one. The only thing I wasn't super big on was how chill Hunter, Ashton, and Rourke seemed to be together considering they all had some kind of physical relationship with Tessa. Other than that, I thought this was a very well done book and I can't wait to keep reading this series.

Terry Spear said…
Thanks so much, Kim! I have some review copies of Dreaming of the Wolf (Book 8), coming out Dec 1, if you'd like to read that one as long as you're in the US! Just email me your address.

I had so many requests for Meara that she find her own wolf that she's in The SEAL in Wolf's Clothing! It's coming out in March!