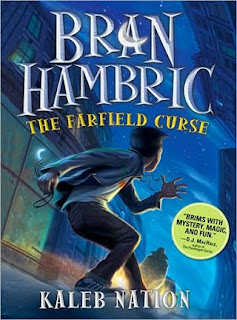 Summary: A six-year-old child, his only history a scrap of paper with his name (Bran Hambric), is found inside a securely locked vault in a large city bank. He grows into a strapping teenager, remembering nothing before the vault, mostly forgotten even by his foster parents. But elsewhere, Bran is not only remembered; he is sought by those who want him back. dead or alive.
Review: (Note: I'm sort of re-doing my review for The Farfield Curse because my original review was written in April 2010. My blog was only a couple of months old and middle grade isn't my usual read so I didn't really know how to review it without comparing it to another series. Here is a link to my old review. I'll keep it just so I can see how I have changed as a reviewer.)
Bran Hambric. He's a sweet kid, but he wasn't my favorite character. He had some great moments and as main characters go, he's definitely up there. Kaleb just wrote better secondary characters in my opinion. He is a solid character, but he might be a bit too innocent for my tastes. I think that's why he fell short as my favorite. Astara, Polland, and Adi were all strong characters and I loved the different perspectives they gave to Bran. Astara is the girl going through similar things Bran is going through with her age and magic. She gives Bran a young female's Polland is a gnome so he has to hide through most of the book and he gives Bran that underground perspective. Adi is a more experienced woman (not in a sexual way) so she gives insight that seems more wise. I don't know which of those 3 would be my favorite. Probably Astara, but they all come pretty close so well done Kaleb on writing characters that are just plain likable. Let's not forget about Rosie. If she was more central to the story then she might be in the running as a fav, but she kept life in the Wilomas house interesting.
The story was dark in my opinion. I didn't think much of it when I read The Farfield Curse the first time, but it didn't escape my notice this go around. That isn't a bad thing. Not at all. It isn't overpoweringly (not sure if that's a word) dark so it would scare kids away. It's just a different flavor from other middle-grade books I've read. Granted, I don't read a lot of MG so it might fit in perfectly. Someone that does read more of that genre can tell me if I'm crazy or not. The main story with Emry and the Farfield Curse and Baslyn was dark, but it was balanced quite well with the happenings at the Wilomas house. There is a sort of silliness that goes along well in this book because of how it balances the darker parts of the story. As an added note, when I was reading this book I could hear Kaleb in my head. Not the entire time, but while reading some of the dialogue he was definitely there. Not sure if that's because I've been watching too many of his videos or what. Anyways I certainly recommend this book to anyone looking for a good fantasy series to start.
I originally gave the book 4.5 howls and I'm going to have to keep the rating at 4.5 howls. Great story!
4.5 howls Bran Hambric Kaleb Nation