The Specter Key by Kaleb Nation 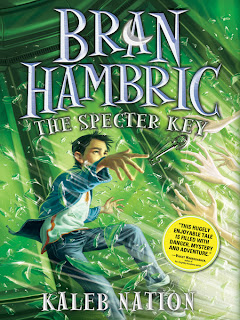 Summary: Blogging phenom Kaleb Nation delivers an exceptional follow-up to his debut hit, The Farfield Curse. Re-enter the world of Dunce where magical hero Bran Hambric has recently discovered a safe deposit box in his mother's name-in the very vault where he was discovered as a boy. Now he's on a frightening path that eventually leads to his father, whom Bran believed to be dead. When Bran's best friend, Astara, is kidnapped and turned into a Specter, he must explore a side of himself he never knew existed. But will the magic destroy him the way it destroyed his mother?
Review: Bran is back along with some old friends (Adi, Polland, and Astara), as well as some new ones. The old characters were still fabulous to read about. I savored every scene with Adi, Polland, and Astara because there were new characters for Bran to meet. Let's get into some of those, shall we? Thomas. Um no. He just...no. He's going to have to do a lot of redeeming to make him even remotely appealing to me. Gary was interesting, but I'm on the fence with him. I don't quite know what to do with him at the moment. If he returns in another book, maybe he'll be able to convince me he's a decent guy. My biggest problem with him was how much of a jerk he seemed to be to
Bran when Bran first met him. Maybe that's just me, but I'm keeping my eye on him. Then there's Nim. I didn't know if I was going to like her or not because of Thomas, BUT she turned out to be an interesting little character. And I mean little. She's a fairy...sprite...thing...? She's some fierce little something or other and I thought she was great. A very cute character.
Now let's talk story. The writing and the story itself was excellent, but really Kaleb? Why did you do that to Astara? I'm not going to say any more because I don't want this to be a spoilery review, but dang. I started making weird noises and my friends gave me odd looks. I didn't know how to contain all of the emotions I felt while reading this book. Once again, Kaleb blew me away with his storytelling. I'm very excited to see what Bran's next adventure will be. Even if it means I will once again be emotionally distraught by the end. So yeah, Kaleb, anytime you want to finish Bran's next book feel free. ;D
5 howls
5 howls Kaleb Nation The Specter Key