The Vampire Diaries: The Awakening and The Struggle by L.J. Smith 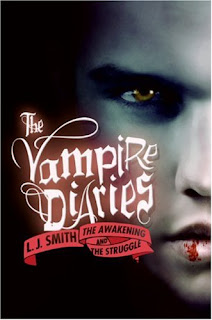 Summary: Elena: the golden girl, the leader, the one who can have any boy she wants. Stefan: brooding and mysterious, he seems to be the only one who can resist Elena, even as he struggles to protect her from the horrors that haunt his past. Damon: sexy, dangerous, and driven by an urge for revenge against Stefan, the brother who betrayed him. Determined to have Elena, he'd kill to possess her. Collected here in one volume for the first time, volumes one and two of The Vampire Diaries, the tale of two vampire brothers and the beautiful girl torn between them.
Review: I wanted to read The Vampire Diaries for the longest time because people are obsessed with the show, and I've read some of the Night World books and The Secret Circle series. I loved the other L.J. Smith books I've read, but I didn't love TVD. I liked it well enough, and I'll read the other bindup since I own it. I didn't like any of the characters except maybe Matt, Stefan, and Meredith. Elena was unbearable to read, and maybe it's just my old hostility towards her type of girl that made it hard to read. She was just awful. She seemed to change a little towards the end, but then she also seemed too much like one of those love struck teens so I was still annoyed with her. Bonnie was like a lost puppy following Elena around. I didn't like her either. Damon was just...ugh. Given the choice between Stefan and Damon, I would have to pick Stefan at this point. Though I am curious to see how things shape out in The Fury and Dark Reunion. Matt and Stefan were both okay, but they still had their moments when I wanted to punch them. The story was decent. The random shift to Bonnie's POV towards the end of The Struggle felt out of place. The diary entries were the same way. I understand the importance to the story, but both of those parts felt forced to me. I think I had a hard time with this book mostly because of characters. It felt like a chore reading this one. I wish I didn't feel that way because I didn't have a problem with Night World and The Secret Circle, but The Vampire Diaries didn't quite hit the mark. Don't let my review keep you from these books. I know there are people that adore this series. I liked it enough to read the other 2 books, but I don't know how much more I'll read. If I'm not impressed with The Fury and Dark Reunion then I might end my TVD experience with this arc.
3.5 howls
3.5 howls L.J. Smith The Vampire Diaries