If I Die by Rachel Vincent 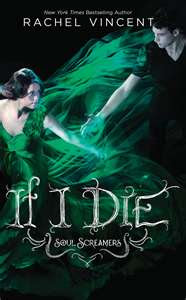 Summary: The entire school's talking about the gorgeous new math teacher, Mr. Beck. Everyone except Kaylee Cavanaugh. After all, Kaylee's no ordinary high-school junior. She's a banshee—she screams when someone dies. But the next scream might be for Kaylee. Yeah—it's a shock to her, too. So to distract herself, Kaylee's going to save every girl in school. Because that hot new teacher is really an incubus who feeds on the desire of unsuspecting students. The only girls immune to his lure are Kaylee and Sabine, her boyfriend's needy ex-girlfriend. Now the unlikely allies have to get rid of Mr. Beck…before he discovers they aren't quite human, either. But Kaylee's borrowed lifeline is nearing its end. And those who care about her will do anything to save her life. Anything.
Review: I wanted to punch Nash and Kaylee more in If I Die than any other. I especially wanted to punch Nash at the end. I wanted to punch Tod too, but Tod is still my favorite. The story was fantastic. I enjoyed the part where Kaylee went back to Lakeside. I haven't read My Soul to Lose yet so I don't know anything that happened when Kaylee was there the first time. Something that got on my nerves was how Kaylee was trying to be "meh" about everything going on in this book. With that said, it was a relief to watch her break down because clearly the whole situation was bothering her. I like how quickly this book moved. Everything happened within a week and that kept the story moving very well. I wasn't too surprised by the ending. Maybe it's because I know more books are coming so I figured something similar was going to happen. I wish I had more to say, but I'm trying to stay vague to avoid spoilers. You know what would help with that? If you would just go out and get this series right now. Go. Now. Rachel Vincent really doesn't hold back when she writes her stories. If you want a series that will keep you on your feet, then pick this one up.
5 howls
5 howls If I Die Rachel Vincent