Bonds of Fenris by S.J. Bell 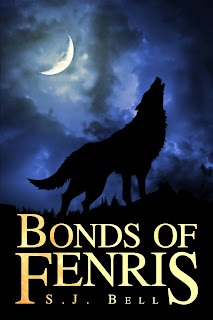 Summary: Talia Thornwood's life ended one year ago, when she became a werewolf. She survived the attack, and the horrifying transformation a month later, but the life she has now is barely worth living. She lurks about in a filthy, run-down house, with too many werewolves crammed into too small a space. Every day is a struggle against the stress of human contact, the romantic prodding of her obnoxious packmate Pierce, and the gnawing hunger for flesh in her soul.
She's all but resigned herself to a dreary existence on the margins of society when she meets Corwin. Corwin is a werewolf like none other. He walks among humans as if it was nothing, and can keep his wolf under control even when the moon is full. Talia's mind is suddenly opened to the possibilities before her, and the realization of how little she really knows about lycanthropy. Corwin claims that he can teach her how to cope as he does, even how to transcend her affliction. But it will not be easy. It is a hard education that requires her to question everything her pack taught her, and confront exactly what she has become. And, more amazingly, what she never stopped being.

Review: Bonds of Fenris is an excellent story to show readers what might be going on in a human’s head as they change into a werewolf. I knew it was a sort of growing up story and I naturally assumed it was about Talia growing up, but every character had their chance to grow. I liked all of the characters a lot. They showed great depth and strength. Pierce annoyed me though. He took some getting used to. I liked the concept of Bonds of Fenris very much. There are a lot of books about shifters out, but I haven’t seen too many go into detail about how a new wolf might feel after being infected. This book does a great job with getting you into that mindset. The fear and the confusion. I saw the ending coming though. It wasn’t something I figured out from the first chapter, but a few pages before the big shock thing is revealed I knew what was going on. I do indeed recommend you checking this book out if you want a good read from the POV of someone who doesn’t like to be a wolf. In a lot of shifter books I’ve read, the main characters feel at home in their wolf skin, but no one in this pack was like that. It was a nice change from the rest of the shifter books out there.