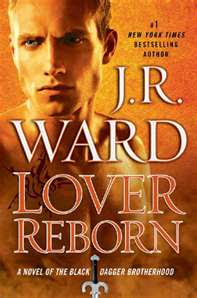 Summary: Ever since the death of his shellan, Tohrment is a heartbroken shadow of the vampire leader he once was. Brought back to the Brotherhood by a self-serving fallen angel, he fights again with ruthless vengeance- and is unprepared for a new tragedy. Seeing his beloved in dreams—trapped in a cold, desolate netherworld—he turns to the angel to save his former mate, only to despair at the path he himself must take to set her free. As war with the lessers rages, and a new clan of vampires vies for the Blind King’s throne, Tohr struggles between an unforgettable past, and a future that he doesn’t know he can live with… but can’t seem to turn away from.
Review: I ended Lover Reborn with all the feels. All of them! What am I honestly supposed to say about this book? First off, Tohr is my favorite Brother. He always has been, and he probably always will be. I was nervous about this book mostly because he's my favorite and I wanted him to be happy, but I wasn't sure if that was possible with past events. He grew a lot throughout this book which was exciting to see. I liked getting to know No'One as well. I don't remember her being introduced into the series to be honest (it's been a while since I've read a BDB book), so it was nice to meet her as a semi-new character. She seemed to grow a lot as well. I loved watching her relationship with Xhex evolve. I liked seeing Layla again. She gets some hate from people, and I'm not really sure why. She wasn't my favorite person in this book, but I don't hate her. Can I just say I loved Lassiter in this story? He was just fantastic. The story was excellent, and you get a better look at Xcor and his group of followers. There was friction in another relationship because of some stuff that happens in this book, but it was believable. As much as I like seeing characters happy I do enjoy seeing some conflict as well. There are some things I wonder about after ending Lover Reborn, but I won't go into speculation or anything because of spoilers.
4.5 howls
4.5 howls JR Ward Lover Reborn