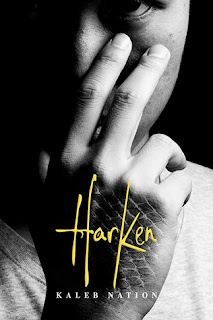 Summary: After surviving an assassination attempt, teenager Michael Asher discovers that he is at the center of a worldwide conspiracy reaching higher than any earthly power. A supernatural organization desperately wants him dead. He doesn't know why. Everyone who might have the answers has already been killed.
Tumbling into a web of international secrets, Michael is forced to fight back and dig up the truth. He begins to question how much of the world is truly as people are led to believe it is. Are there things that humanity is not being told? Who is the puppet master? And how far into the maze can he venture before he is lost forever?
Review: I was super excited for Harken to be released, and it was worth it! Michael was an excellent character. My only big flaw with him is his attitude. He made statements like, "I'm never wrong" and similar ones too. That's all well and good, but it made him sound full of himself. If he said, "I haven't been wrong yet" or something similar, then I would have liked him more. He wasn't my favorite character, but I liked him well enough. I have a three-way tie for my favorite. Alli, Thad, and Callista. Their attitudes were superb. I smiled every time I saw them on the page. Of course, since I have three favorites, I'm expecting there to be a lot of hurt in the next book. Authors are mean like that. *glares at Kaleb*

The story was great! I was nervous/excited to see how Kaleb does in the YA genre, and I think he did a great job. The beginning of the story moved along very quickly which I loved. The fact that Michael's birthday was a big deal and only in a matter of days made the beginning of the story move fast. *I don't think this is a spoiler* That being said, it did seem like everyone was making a big deal out of Michael's birthday. When it actually happened, it seemed to be more of an afterthought. I was expecting something more dramatic to happen. I don't know how I feel about the priest swearing either. Don't get me wrong, Harken isn't laden with swear words, and what is in the book is done well. I've seen religious people swear, but I've never seen a priest/pastor do it though. That's the only thing that felt off to me while I read Harken. I think that's the only criticism I have of Harken. I absolutely recommend this book!