Such a Rush by Jennifer Echols 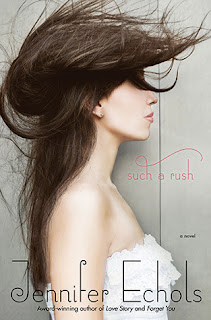 Summary: Heaven Beach, South Carolina, is anything but, if you live at the low-rent end of town. All her life, Leah Jones has been the grown-up in her family, while her mother moves from boyfriend to boyfriend, letting any available money slip out of her hands. At school, they may diss Leah as trash, but she’s the one who negotiates with the landlord when the rent’s not paid. At fourteen, she’s the one who gets a job at the nearby airstrip.
But there’s one way Leah can escape reality. Saving every penny she can, she begs quiet Mr. Hall, who runs an aerial banner-advertising business at the airstrip and also offers flight lessons, to take her up just once. Leaving the trailer park far beneath her and swooping out over the sea is a rush greater than anything she’s ever experienced, and when Mr. Hall offers to give her cut-rate flight lessons, she feels ready to touch the sky.By the time she’s a high school senior, Leah has become a good enough pilot that Mr. Hall offers her a job flying a banner plane. It seems like a dream come true . . . but turns out to be just as fleeting as any dream. Mr. Hall dies suddenly, leaving everything he owned in the hands of his teenage sons: golden boy Alec and adrenaline junkie Grayson. And they’re determined to keep the banner planes flying.Though Leah has crushed on Grayson for years, she’s leery of getting involved in what now seems like a doomed business—until Grayson betrays her by digging up her most damning secret. Holding it over her head, he forces her to fly for secret reasons of his own, reasons involving Alec. Now Leah finds herself drawn into a battle between brothers—and the consequences could be deadly.
Review: Such a Rush is the first Jennifer Echols book I've read and it certainly won't be the last. The fun thing about this book for me is that it is set in South Carolina, and guess where I live? Yep. South Carolina. I don't have a lot of pride in SC, but it's always fun for me to read a book set here because I can visualize it better. I liked the characters well enough, but none of them stood out for me. That's probably the biggest problem I had with Such a Rush. Leah is a great main character and I enjoyed reading her, but I didn't relate to her until closer to the end. I loved the interaction Leah had with Mr. Hall, Grayson, and Alec. It's always interesting to see a family with different perspectives like that. Even though they were all part of the same family, they all had different things driving them. The story was neat. I wasn't sure how I would like it because I don't know much about planes (and by much I mean I don't know anything about planes), but the story wasn't a bunch of pilot speak. I remember seeing a lot of love for Such a Rush when it first came out, and I understand why. This is a really cute book. I can't wait to add more of Jennifer's books to my library.

Deborah Lemmon @ Split-Site PhD said…
This is a really interesting summary. I like the thought of not having a perfect or rich main character. I love that this character has to deal with things that some kids really do have to deal with in life.

Unknown said…
i like the story of the book. its very interesting