February 20, 2017
Where the Wolves Watch: A Series of Unfortunate Events 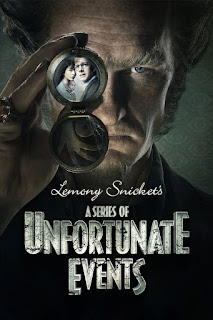 Disclaimer: I have read through this entire series a couple of times. When the TV show was released, I re-read the books as they corresponded with the episodes.

Review: If you're looking for a series where kids go on an adventure and are back home with their parents at the end of the day, or a series where there is love and frivolity until the end of days, you should look for these more pleasant things. I, myself, have been quite invested in the Baudelaire children for quite some time. As a young child, I was fascinated with the horrendous things that take place within the pages of these books. When Netflix decided to make a TV show of the Baudelaire children, I was appalled. Why would a company as well known as Netflix make a mockery of such tragedy? Unfortunately, the show exists, and so does my continued heartbreak for these children. The first segment of the show follows the Baudelaires as they are put in the loathing hands of Count Olaf. The most despicable man of all time. Count Olaf is already a rubbish actor, but his performance was somehow out done in terribleness by the equally frightening Neil Patrick Harris. I quivered with fright as these two men became one and Count Olaf was brought to life once more. Patrick Warburton did a passable rendition of my dear Lemony Snicket. I desired nothing more than to jump into the screen and help him with the Baudelaire children. Let's speak about the children. The horrors they have experienced are indescribable. They were threatened and almost murdered numerous times. They have a commendable will to live that is unlike anything I've ever seen. They are truly special children. Sadly, that is not enough to keep them away from the upcoming tragedies. Now, I have learned Netflix is not done with the Baudelaire children. They plan on exploiting their pain for another season. Possible two more seasons. I will continue to watch for research purposes, but I implore everyone else to pry their eyes from the horrors within this series. I'm going to talk with the very favorable dissenters and see if there is anything we can do to keep Netflix from continuing this travesty. Good luck, Baudelaire children.