Review: The Sculptor by Scott McCloud 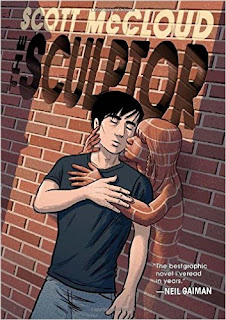 Summary: David Smith is giving his life for his art—literally. Thanks to a deal with Death, the young sculptor gets his childhood wish: to sculpt anything he can imagine with his bare hands. But now that he only has 200 days to live, deciding  what  to create is harder than he thought, and discovering the love of his life at the 11th hour isn't making it any easier!
This is a story of desire taken to the edge of reason and beyond; of the frantic, clumsy dance steps of young love; and a gorgeous, street-level portrait of the world's greatest city. It's about the small, warm, human moments of everyday life…and the great surging forces that lie just under the surface. Scott McCloud wrote the book on how comics work; now he vaults into great fiction with a breathtaking, funny, and unforgettable new work. (Goodreads)
Review: The Sculptor follows David who is a struggling sculptor who makes a deal with the devil. In doing so, he gains the ability to sculpt whatever he desires. David was interesting to read about and I found his struggles to be easy to relate to. Except for the conversation with Death. I also appreciated that David still struggled after he struck his deal. Death didn't give him an incredible ability and David was suddenly set. There was plenty of conflict to keep the story moving. There were side characters that David interacted with throughout the story. One of them was Meg. She reminded me of people I knew in my real life which was interesting. I've never had that experience with a graphic novel. She is quirky and fun, but she has her own demons to fight off. There was a specific scene between her and David that I really appreciated, but I'm going to let you guys figure that one out on your own.

The art was incredible. I've only read one other Scott McCloud book, Understanding Comics, but that was structured completely differently from The Sculptor. The drawings were beautiful and realistic. Then there is the artwork associated with the sculptures David creates. Every piece was unique and striking. The struggle for identity that David goes through in the book hit especially close to home for me. The Sculptor is a big book, but it is definitely worth checking out.