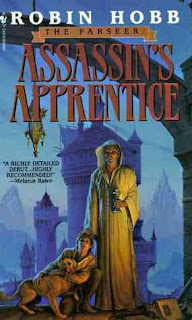 Synopsis: Young Fitz is the bastard son of the noble Prince Chivalry, raised in the shadow of the royal court by his father's gruff stableman. He is treated like an outcast by all the royalty except the devious King Shrewd, who has him sectetly tutored in the arts of the assassin. For in Fitz's blood runs the magic Skill--and the darker knowledge of a child raised with the stable hounds and rejected by his family. As barbarous raiders ravage the coasts, Fitz is growing to manhood. Soon he will face his first dangerous, soul-shattering mission. And though some regard him as a threat to the throne, he may just be the key to the survival of the kingdom.

Review: I feel like Robin Hobb is one of those writers everyone who enjoys fantasy needs to read. Her ability to create interesting, unique characters and compelling stories is extremely impressive. I loved Fitz so much. I found his past and his upbringing fascinating and I wanted him to succeed in everything he tried, which is actually a very dark thought because he was trained to be an assassin. Somehow I even really enjoyed Burrich. I say *somehow* because he can definitely be a dick at certain points of the book. I was surprised and excited to be introduced to the Fool in this book. I say surprised because I know the series Hobb is working on now is called The Fitz and The Fool, and I'm assuming it refers to the same fool. I just thought he would be introduced much later. He was intriguing. I'm curious to see what role he plays in later books. As far as characters go, those were the most memorable for me, but there were definitely other interesting characters. Lady Patience, Molly, the princes, King Shrewd, everyone was well developed and I hated how much I loved reading about them.

The story was a bit slow to start. It's the first book of a fantasy series, so a lot of this book was building the world, characters, and relationships. One thing I liked was how Fitz was treated. He is the bastard child of a prince, and he gets treated a bit like dirt. He isn't pampered and welcome with open arms. Fitz has an interesting connection with dogs that I hope gets expanded on in later books. Be prepared when picking up this book that the assassinations are more subtle than you might think. When I hear "assassin" I think of things like the Assassin's Creed series where a person sneaks around and stabs a knife through someone's neck. That's not this book. Not even close. Fitz gets trained in the art of poisoning. So, the murders are not as theatrical as I first thought which was actually rather refreshing. It also allowed for this great mixture of political intrigue throughout the story with assassinations peppered in. Assassin's Apprentice, while sometimes slow, was a great experience. Definitely worth checking out.