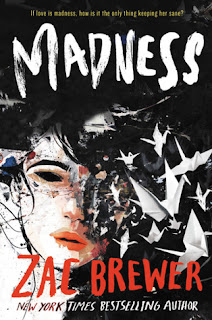 Synopsis: Brooke Danvers is pretending to be fine. She’s gotten so good at pretending that they’re letting her leave inpatient therapy. Now she just has to fake it long enough for her parents and teachers to let their guard down. This time, when she's ready to end her life, there won’t be anyone around to stop her.
Then Brooke meets Derek. Derek is the only person who really gets what Brooke is going through, because he’s going through it too. As they start spending more time together, Brooke suddenly finds herself having something to look forward to every day and maybe even happiness.But when Derek’s feelings for her intensify, Brooke is forced to accept that the same relationship that is bringing out the best in her might be bringing out the worst in Derek—and that Derek at his worst could be capable of real darkness.

Review: I'll be honest, this book was hard to read. Zac doesn't pull any punches when describing what it's like to suffer from suicidal tendencies. Madness was raw and emotional. I related to Brooke in a scary way, but it was also weirdly comforting to see that part of me so openly displayed in a book. That being said, there were a few times where Brooke got on my nerves. Again, I related to her, but she was still a pain. The way she treated Duckie at times was incredibly unfair. Between lying to him about her mental health to ditching him for Derek, I got pretty annoyed with Brooke. I adored Duckie. He made me think of my best friend pretty often which is probably why I got so attached to that character. He was a fun character to help break up the serious thoughts in Brooke's mind.

Onto the story, Madness is dark. Not just because it's about suicide. It's also about abuse and aggression. Brooke has so many hateful feelings towards herself and she sometimes lashes out on Duckie, her parents, and her therapist. Then there's Derek. When you first read the synopsis, this book sounds like it could be one of those, "2 kids wanted to kill themselves, found each other, fell in love, and lived happily ever after." Don't worry, it's not. Derek and Brooke's relationship is pretty scary. They love hard and fast, and not in a good way. There were little things about the story I found particularly powerful like the subtle way Brooke's view on life and living changed. There was a scene when she was talking to Derek about college and it suddenly occurred to her that she wanted a future. She wanted to believe that there was more for her life. If you can handle this subject matter, I would highly recommend checking this book out.