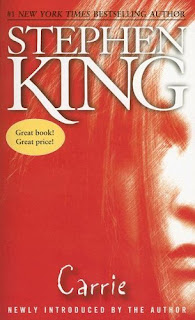 Synopsis: Carrie knew she should not use the terrifying power she possessed... But one night at her senior prom, Carrie was scorned and humiliated just one time too many, and in a fit of uncontrollable fury she turned her clandestine game into a weapon of horror and destruction...

Review: Carrie was such a unique book. I feel like there isn't a way to discuss characters because of the way the book is structured. The book was written as if it was a collection of research on telekinesis and Carrie's life. So, instead of the book being broken up by chapters, there would be a title of a fake book or article. Then there would be a section which kind of summarizes what information that article had in it. Finally, there would be a bit which actually felt like a story from Carrie's perspective as we see her living her life described in this article. It's bizarre, but fascinating. Carrie was a tragic character, but I appreciated that she was fat and not pretty. I watched the original movie when I was younger, and I didn't realize Carrie was described differently in the book. I wish they kept that element. The opening scene as Carrie has her first period hurt my soul. I remember what that moment was like for me, and reliving it from Carrie's perspective was hard. If you're a person who is sensitive to women hate, this will be a hard book to read. The entire book follows Carrie's abuse by this group of girls, and the tragedy that comes from it. I have a hard time describing this book accurately because of how it is written, but it's definitely worth reading.