Empress of a Thousand Skies 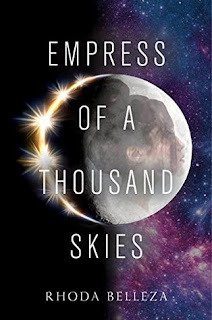 Synopsis: Crown Princess Rhiannon Ta'an wants vengeance.
The only surviving heir to an ancient Kalusian dynasty, Rhee has spent her life training to destroy the people who killed her family. Now, on the eve of her coronation, the time has finally come for Rhee to claim her throne - and her revenge.Alyosha is a Wraetan who has risen above his war refugee origins to find fame as the dashing star of a DroneVision show. Despite his popularity, Aly struggles with anti-Wraetan prejudices and the pressure of being perfect in the public eye.Their paths collide with one brutal act of violence: Rhee is attacked, barely escaping with her life. Aly is blamed for her presumed murder.The princess and her accused killer are forced to go into hiding - even as a war between planets is waged in Rhee's name. But soon, Rhee and Aly discover that the assassination attempt is just one part of a sinister plot. Bound together by an evil that only they can stop, the two fugitives must join forces to save the galaxy.
Review: Empress of a Thousand Skies was a fast paced book, yet it took a while for me to get into it. I wasn't impressed with Rhee as a character and that disappointed me. She was very much a typical lost princess character I've read in other YA books. I did like Aly though. His relationship with Vin was humorous, and I appreciated how they showed reality television in this world. That was fascinating and I wished more was done with that. Kara was also interesting. I already figured out her secret, but I liked her character regardless. My only complaint is that I wish we could have seen her interact with people and the world a little more.

Like I said, the story is very fast paced. The book starts with a bang and doesn't really ever stop. That being said, I didn't think the world was very developed which is important if you are writing a sci-fi book and there are other planets involved. Even the planets we got to experience didn't feel very fleshed out. This is one of the few books where I saw the plot twist coming, but it didn't actually take anything away from the book. It was interesting, and Rhoda did something different than what other YA authors do. That was a nice touch. I enjoyed this book, but I was left wanting more and expecting more. I think this would have been better if I hadn't read the synopsis, because it is extremely inaccurate and I was expecting a different story than what I got. Still, I'm excited for book 2 so I can see what happens to these characters.