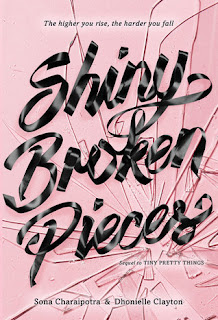 Synopsis: June, Bette, and Gigi have given their all to dance at Manhattan’s most elite ballet school. Now they are competing one final time for a spot at the prestigious American Ballet Company. With the stakes higher than ever, these girls have everything to lose… and no one is playing nice.
June is starting to finally see herself as a prima ballerina. However, getting what she wants might cost her everything—including the only boy she’s ever loved. Legacy dancer Bette is determined to clear her name after she was suspended and accused of hurting her rival, Gigi. Even if she returns, though, will she ever regain the spotlight she craves? And Gigi is not going to let Bette—or the other dancers who bullied her—go unpunished. But as revenge consumes her, Gigi may be the one who pays the price.After years of grueling auditions, torn ribbons, and broken hearts, it all comes down to this last dance. Who will make the cut? And who will lose her dream forever?
Review: I'm going to go ahead and say that this review will have spoilers from the first book. Shiny Broken Pieces picks up not long after Tiny Pretty Things. I would highly recommend reading these two books back to back if at all possible. We follow the same characters as the first book, June, Bette, and Gigi, as they come to terms with what happened at the end of the first book. One thing I really enjoyed was Gigi trying the "bad girl" attitude. No, it didn't last the entire book, but it was good to see that she was capable of being as mean as the other girls. I felt like it gave her much needed depth. I also loved getting to know Cassie. One of the things I wondered while reading the first book was whether or not Cassie was using Henri to pull the strings and hurting people at the academy. While I wasn't necessarily right, I'm glad Cassie was in this book and we were able to see how dark she became.

As for the story itself, I felt like the stakes were much higher in Shiny Broken Pieces which I appreciated. Even though it was still a story of the girls trying to win a coveted spot, I didn't feel like I was reading the same story over again. All of the character interactions felt fresh. There is an underlying mystery of who pushed Gigi in front of the car at the end of the first book. I feel like that was paced really well thoughout the book. It didn't last the entire book, but it lasted long enough to stay intriguing. I shouldn't have been surprised by who pushed Gigi, but I genuinely was. I was also surprised by how Gigi handled her relationships by the end of the book. Another thing I thought was handled well was who ended up getting the spot at the American Ballet Company. I won't say too much, but I think it did a good job of nailing home the reality of being a mean girl won't actually get you anywhere. The last thing I want to talk about is June's bulimia. I was a little disappointed that her ED didn't seem to have consequences in the first book, but that completely changes with Shiny Broken Pieces. Someone even says to June that she's not healthy enough for ballet. That being addressed made me love this series even more. This is definitely one of the best contemporary series I've read and I would highly recommend it.