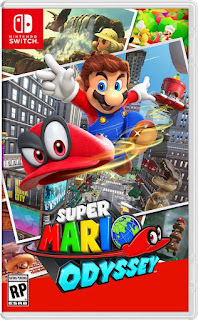 Guys. This game. This freaking game. Mario is one of those characters that I've grown up with, and I get excited with every new installment. But this game has surpassed everything I could have hoped. I've seen the trailer but, beyond that, I've been trying to stay as spoiler free as possible. The biggest aspect of this game is exploration. Leave no stone unturned. Literally. There are collectibles in some of the rocks. From the very first level, the amount of detail is extraordinary. Every level feels unique and beautiful. Even though there are a couple forest/wooded areas, and there are a couple of water worlds, none of it feels repetitive. With other Mario games, I would dread certain levels (ice and water worlds in particular). This wasn't a problem with Odyssey. I enjoyed every level immensely. The platforming felt surprisingly smooth. Part of platforming in this game involves Cappy, the creature possessing Mario's hat. You have to throw him and jump on him in order to complete certain tasks. My favorite level is Metro Kingdom, New Donk City. I liked seeing how they incorporated a major Earth city into the world of Mario. More than that, this is where I noticed how much detail they actually put in the game. New Donk City is a play on Donkey Kong. The Mayor is Pauline (the princess kidnapped in the original arcade game), and all the street signs are named after Donkey Kong characters. That warmed my soul so much.

As much as I loved this game, I did still have some complaints. First, as big as the worlds are, there seemed to be a lot of unneeded space. To me, this was mostly noticeable in the Sand Kingdom. For as many power moons as there are to collect, I wish they were more spread out to make more use of the space. Another issue I have is with the ways you have to get some of the power moons. In every world, there are 2 races you complete against Koopas. The first one isn't too bad. The second one can be a pain. Specifically, in the Wooded Kingdom. You have to clear a giant gap with a convoluted long jump, cap bounce, dive combo which I'm having a hard time doing. As far as I can tell, there is NO way to win this race without mastering this trick which feels like something meant for speedrunners. I think Nintendo forgot for a bit that they do still make these games primarily for children. I've seen some people complain about how you can't 100% complete this game before the final boss. I actually enjoyed this. Backtracking in video games can be annoying, but I think it works with Odyssey. Plus, you get to cross paths with a certain princess.

Mario Odyssey is absolutely one of my favorite Mario platformers. It's long. It's packed with content. It's a load of fun.