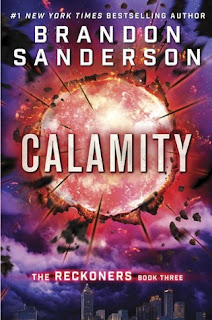 Synopsis: When Calamity lit up the sky, the Epics were born. David’s fate has been tied to their villainy ever since that historic night. Steelheart killed his father. Firefight stole his heart. And now Regalia has turned Prof, his closest ally, into a dangerous enemy.
David knew Prof’s secret, and kept it even when Prof struggled to control the effects of his Epic powers. But facing Obliteration in Babilar was too much. Once the Reckoners’ leader, Prof has now embraced his Epic destiny. He’s disappeared into those murky shadows of menace Epics are infamous for the world over, and everyone knows there’s no turning back. . . .   But everyone is wrong. Redemption is possible for Epics—Megan proved it. They’re not lost. Not completely. And David is just about crazy enough to face down the most powerful High Epic of all to get his friend back. Or die trying.
Review: First off, I didn't put any trigger warnings on here because, as there is still guns being used, it feels less prevalent than the earlier books. I also figure, if you've read up to Calamity then you probably don't care if guns are being used. As for characters, there isn't really much to say about them that hasn't already been said. I enjoyed seeing some characters like Prof and Megan struggle with things throughout the book. I enjoyed the setting in this book as well. A city made of salt was an interesting choice and it brought some new challenges that the characters had to adapt to. I will say there were some aspects of the story that I was disappointed in. This series plays a bit with the idea of parallel worlds. I guess, because I've read some of Sanderson's other works and I know how his books can be, it felt like there was a lot missing out of this series as a whole. It's still very enjoyable, but I think he could have expanded on this idea of parallel worlds. Maybe he'll do that in a later series? Who knows? I also wasn't terribly fond of the ending. I won't give it away, but it felt like a bit of a cop out. I was just a bit underwhelmed with the conclusion of this series.