In Real Life by Cory Doctorow and Jen Wang 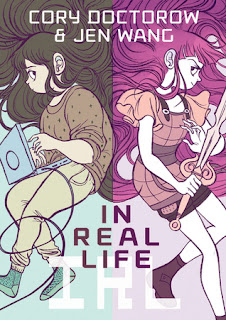 Synopsis: Anda loves Coarsegold Online, the massively-multiplayer role-playing game where she spends most of her free time. It's a place where she can be a leader, a fighter, a hero. It's a place where she can meet people from all over the world, and make friends.
But things become a lot more complicated when Anda befriends a gold farmer--a poor Chinese kid whose avatar in the game illegally collects valuable objects and then sells them to players from developed countries with money to burn. This behavior is strictly against the rules in Coarsegold, but Anda soon comes to realize that questions of right and wrong are a lot less straightforward when a real person's real livelihood is at stake. From acclaimed teen author (Little Brother, For the Win) and Boing Boing editor Cory Doctorow and Koko Be Good creator Jen Wang, In Real Life is a perceptive and high-stakes look at adolescence, gaming, poverty, and culture clash.

Review: I have seen people talk about In Real Life favorably, so I definitely had to pick it up when I saw it at my second-hand bookstore. As a character, Anda was easy to relate to but still flawed. I thought she was a great depiction of what happens when ignorant Americans try to force people from other countries to act like them. I wish that we had been able to get to know some of the side characters more. I feel like they could have added to the conversation in a meaningful way. Instead, we only got little scenes to show that Anda wasn't a complete loner. She was in a D&D club and went out with her family. These bits were nice, but they didn't do much to build up the world or Anda's character. There are also side characters in the world of Coarsegold Online, but we don't really know them either. We have conversations with a couple, Liza and Raymond, but the rest fall the the background rather quickly.

The story was interesting. Again, there were some moments that could have been expanded. I also wish we had more development of the game's world. I thought Cory and Jen did a great job of depicting how difficult it can be for teens to befriend people online. I still have a hard time telling mom about some of my online friends because she has always been against that idea. Seeing how close Anda got to Liza and Raymond hit close to home. I have a fairly close group of online friends, so I know how important those relationships can be.

The art is beautiful. It was great to see how light and colorful the game world is. It was interesting to see how they depicted gamers in the real world. I don't know any who generally sit in the dark to play video games, so that was weird to me. That being said, it did make for a very interesting contrast when going from the real world to the game world. I liked that they made all of the gold farmers the same kind of character. It really played into Anda's ignorance when she approached a character who she thought was Raymond, but it was someone else.

As a whole, this story was enjoyable but I wished it was longer. Some parts of the world and the characters felt missing, which was unfortunate.