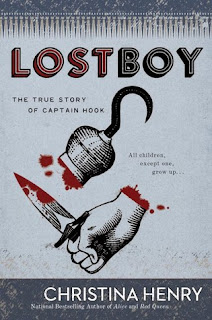 
Synopsis: There is one version of my story that everyone knows. And then there is the truth. This is how it happened. How I went from being Peter Pan’s first—and favorite—lost boy to his greatest enemy.
Peter brought me to his island because there were no rules and no grownups to make us mind. He brought boys from the Other Place to join in the fun, but Peter's idea of fun is sharper than a pirate’s sword. Because it’s never been all fun and games on the island. Our neighbors are pirates and monsters. Our toys are knife and stick and rock—the kinds of playthings that bite.Peter promised we would all be young and happy forever.


Review: I really need more Peter Pan retellings in my life. This book was so good. I love seeing how people interpret the origin stories of villains. Hook's backstory in Lost Boy was very well done. You could see him constantly at war with himself about how much he loves Peter and the lost boys, but he also knows their way of life is dangerous. He struggles with being incredibly protective and how that changes the dynamics between the boys. I liked to see how the other boys acted around Jamie (Hook) and Peter. There were some characters that made me think of the cartoon, specifically the twins Nod and Fog. The way Christina depicted Peter was brilliant. There was so much darkness in his character that fit the story incredibly well. I do wish we had a little more interaction with the pirates. The story was obviously not focused on them, but I think it would have been nice to see Jamie interact with them a bit more since he grows up to become one.

Lost Boy was short, but dark. Christina didn't pull any punches when she showed how dangerous Neverland really was. There were scenes were even I was surprised at how gory they were. We did get to go to a few iconic places. Peter Pan's hideout and Skull Island were prominent in this book. Christina also introduced seemingly new locations and monsters which fit in quite well with the rest of the world. We do get to see a bit of the fairies in Neverland, but not very much. I think this could have been a fun thing to expand on, but Christina left it alone. It worked fine for the story as a whole, but I like seeing how authors show off fairies in stories, and I think this could have been a great inclusion.