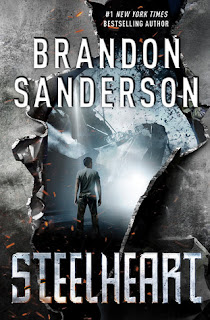 Synopsis: Ten years ago, Calamity came. It was a burst in the sky that gave ordinary men and women extraordinary powers. The awed public started calling them Epics. But Epics are no friend of man. With incredible gifts came the desire to rule. And to rule man you must crush his will.
Nobody fights the Epics...nobody but the Reckoners. A shadowy group of ordinary humans, they spend their lives studying Epics, finding their weaknesses, and then assassinating them.And David wants in. He wants Steelheart — the Epic who is said to be invincible. The Epic who killed David's father. For years, like the Reckoners, David's been studying, and planning — and he has something they need. Not an object, but an experience.He's seen Steelheart bleed. And he wants revenge.
Review: This was a re-read for me and it was just as fun as the first time I read it. David, as a character, was interesting and incredibly flawed. He has this one-track mind about killing Steelheart, and he doesn't think of much else. Though, this dedication does make him attractive to the Reckoners, the rebel group trying to take out Epics. I didn't think the other Reckoners were quite as fleshed out as David and Prof which is a bit of a pity. I did greatly enjoy meeting and interacting with other Epics. Their powers feel so different from the standard Marvel/DC villains and it was very enjoyable getting to see that.

From the start, Steelheart is full of action. It felt like something major was happening in every chapter which made this book extremely easy to read. When I read this book the first time, I thought the ending was predictable. Upon re-read, while it still felt predictable, I enjoyed seeing how the story progressed through a new mindset. As someone who already knew, for certain, what happened at the end. I haven't read the rest of the series yet, so I'm excited to see how the overall story ends. This group called the Faithful are mentioned a couple of times in the book, and I hope we get to dive a bit deeper into that group later in the series. I'm also curious to know if any "good" Epics exist, or if they are all power-hungry monsters. The biggest thing I feel like people should be wary of is the constant use of guns. I know that's a very sensitive topic and David is very knowledgeable of them. He has a scene where he is breaking down and explaining different gun types. If this sounds like a turn off to anyone, then they might want to avoid this book.

Engaging take on superhero/supervillain stories with a slightly predictable plotline.