The Smoke Thieves by Sally Green 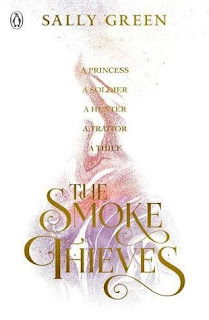 Synopsis: In Brigant, Princess Catherine prepares for a political marriage arranged by her brutal and ambitious father, while her true love, Ambrose, faces the executioner's block.
In Calidor, downtrodden servant March seeks revenge on the prince who betrayed his people. In Pitoria, feckless Edyon steals cheap baubles for cheaper thrills as he drifts from town to town.And in the barren northern territories, thirteen-year-old Tash is running for her life as she plays bait for the gruff demon hunter Gravell.As alliances shift and shatter, and old certainties are overturned, our five heroes find their past lives transformed and their futures inextricably linked by the unpredictable tides of magic and war.Who will rise and who will fall? And who will claim the ultimate prize?
Review: I had a lot of fun while reading this book. I enjoyed all of the main characters which is not common. I was excited every time characters interacted and I could see their threads cross. That being said, there were some things I couldn't help but notice. Catherine made a comment when she met the man she was supposed to marry and said he might have been attractive if it wasn't for the scars on his face. That felt like an unnecessary observation. There are also a couple of characters, March and Edyon, who appear to be attracted to one another. But March also seems to be manipulative which is a pity. If there are other queer characters in later books to help balance this out, then it might not be a terribly big deal. But, it seems as though one of the few queer characters is a bad character. These are things to be mindful of if you do not like this kind of representation.

The story itself was enjoyable, but I felt the world itself lacked a bit. I just had a hard time picturing some of the countries. I was also a little disappointed that we didn't get more experiences with demons and their smoke. We do have a couple of scenes where characters use the smoke to heal someone, but I wish the necessity of this object was a bit more fleshed out. I'm hoping that we get more of the setting and this coveted demon smoke in the future books. I'm curious to see how the smoke gets used in the overarching politics of this world.

Fun, quick read that has some growing to do.