An Unkindness of Magicians by Kat Howard 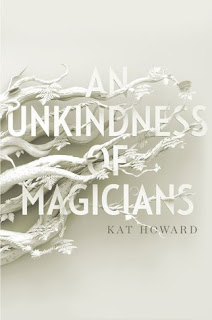 Synopsis: There is a dark secret that is hiding at the heart of New York City and diminishing the city’s magicians’ power in this fantasy thriller by acclaimed author Kat Howard.
In New York City, magic controls everything. But the power of magic is fading. No one knows what is happening, except for Sydney—a new, rare magician with incredible power that has been unmatched in decades, and she may be the only person who is able to stop the darkness that is weakening the magic. But Sydney doesn’t want to help the system, she wants to destroy it.Sydney comes from the House of Shadows, which controls the magic with the help of sacrifices from magicians.

Review: Dang, I really wanted to like this story more than I actually did. I'm just going to go ahead and say, as soon as I heard the premise, my first thought was, "Wow that sounds a lot like the Fate series." As it turns out, it is quite a lot like the Fate series. So much so that I was distracted through most of the book. I know that part of the enjoyment of this book is seeing how Sydney really falls into place with this world, but I didn't find the reveal to be all that interesting. I liked Sydney as a character, but I didn't really care for her connection to the other characters. None of the other characters seemed very fleshed out which is a shame. I think if the book was longer, then we could have had more experiences with the other characters.

The story was interesting but, again, too familiar for my liking. I did love how the magic was handled. I liked how there were actual consequences to using magic in this world. And it was written beautifully. I would love to read pages of characters just doing magic. No story necessary. Just write scenes with them doing magic. I also liked the progression of tone in the story. At first, the competitions are just looking to see who can perform magic better and no one really gets hurt, but that changes quickly as life-threatening challenges are made.

Good concept, but could have stood to be longer and differentiated more from an already established series.