Grace and Fury by Tracy Banghart 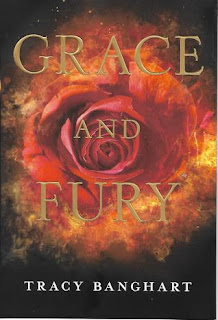 Synopsis: In a world where women have no rights, sisters Serina and Nomi Tessaro face two very different fates: one in the palace, the other in prison.
Serina has been groomed her whole life to become a Grace - someone to stand by the heir to the throne as a shining, subjugated example of the perfect woman. But when her headstrong and rebellious younger sister, Nomi, catches the heir's eye, it's Serina who takes the fall for the dangerous secret that Nomi has been hiding.Now trapped in a life she never wanted, Nomi has only one way to save Serina: surrender to her role as a Grace until she can use her position to release her sister. This is easier said than done. A traitor walks the halls of the palace, and deception lurks in every corner. But Serina is running out of time, imprisoned on an island where she must fight to the death to survive and one wrong move could cost her everything.

Review: Grace and Fury is one of those books that I've heard very few things about. I've mostly seen comparisons to The Handmade's Tale which I feel is pretty accurate. We follow Nomi and Serina as their lives are turned upside down when Serina is sent to prison and Nomi is selected as a prospective wife for the prince. While I found Nomi and Serina to have interesting stories, neither of them stood out in my opinion. I wanted Nomi to have more growth throughout the story, but she really stayed the same impulsive, thoughtless person throughout the entire book. She is constantly depending on those around her to make the logical choices and to make certain decisions for her. I wanted to see her grow out of that. On the flip side, I enjoyed seeing Serina grow while she was in prison. She was able to use her skills from her training as a Grace and incorporate them into her prison life. I appreciated how adaptable she was, even in the most dire of circumstances.

The story was fast-paced which made this for a very quick read. The downside is that I found a lot of the plot points predictable. This is part of why Nomi bothered me. I feel like she would have seen through certain things if she stopped to think about her situation and the things that were said. I don't want to say too much more because spoilers. Some of the side characters were just extremely easy to figure out. Still, where the story fails in originality, it makes up for in the female relationships. A large part of this story is about women fighting other women to the death, and how they became accustomed to that lifestyle. Even still, there are great scenes where the women look out for each other. Generally, I have a hard time with books that are about strong female friendships because that was never something I had, but I appreciated how this book built those friendships even though many of these women had to fight each other. This would be a great book to use as a discussion about getting hurt by other women and moving past that pain.