Empress of All Seasons by Emiko Jean 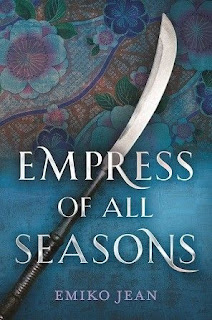 
Synopsis: Each generation, a competition is held to find the next empress of Honoku. The rules are simple. Survive the palace’s enchanted seasonal rooms. Conquer Winter, Spring, Summer, and Fall. Marry the prince. All are eligible to compete—all except yōkai, supernatural monsters and spirits whom the human emperor is determined to enslave and destroy.
Mari has spent a lifetime training to become empress. Winning should be easy. And it would be, if she weren't hiding a dangerous secret. Mari is a yōkai with the ability to transform into a terrifying monster. If discovered, her life will be forfeit. As she struggles to keep her true identity hidden, Mari’s fate collides with that of Taro, the prince who has no desire to inherit the imperial throne, and Akira, a half-human, half-yōkai outcast.

Torn between duty and love, loyalty and betrayal, vengeance and forgiveness, the choices of Mari, Taro, and Akira will decide the fate of Honoku in this beautifully written, edge-of-your-seat YA fantasy.


Review: I hoped I would enjoy Empress of All Seasons, but I was unprepared for how much I would love this world. As far as characters go, I loved seeing multiple sides of this competition through the eyes of Mari, Taro, and Akira. Emiko makes the world feel even more fleshed out with each of these perspectives. That being said, Akira got on my nerves a fair amount. I wasn't terribly fond of him as a character, but I did find him interesting. Mari is wonderful. She's strong and smart in ways that make sense. I also heavily related to her as people constantly feel the need to remind me that I'm not pretty enough to be a wife, so I have to find strengths elsewhere. I just appreciated Mari as a character.


This world was incredible to navigate. I loved seeing the beautiful inclusion of Japanese mythology, and all of the yōkai felt unique. I enjoyed seeing Mari go through the challenges of each season. On that note, I do wish this book was longer. Emiko does such a great job of crafting this world and this palace, but I felt like there wasn't enough time spent in the seasonal rooms. The ending also wrapped up too quickly. I could be saying this because I would happily read this book even if it was over 1000 pages. I just loved this world that much and I think it's meant to be a standalone. One tidbit I enjoyed were the little bits of Japanese lore that it slipped between chapters. It helps us to have a better idea of what inspired this book and certain chapters to be written.