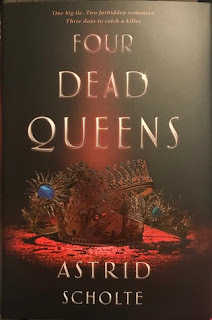 
Synopsis: Seventeen-year-old Keralie Corrington may seem harmless, but she's, in fact, one of Quadara's most skilled thieves and a liar. Varin, on the other hand, is an honest, upstanding citizen of Quadara's most enlightened region, Eonia. He runs afoul of Keralie when she steals a package from him, putting his life in danger. When Varin attempts to retrieve the package, he and Keralie both find themselves entangled in a conspiracy that leaves all four of Quadara's queens dead.
With no other choices and on the run from Keralie's former employer, the two decide to join forces, endeavoring to discover who has killed the queens and save their own lives in the process. When their reluctant partnership blooms into a tenuous romance, they must overcome their own dark secrets in hopes of a future together that seemed impossible just days before. But first they have to stay alive and untangle the secrets behind the nation's four dead queens.

Review: I didn't really know anything about Four Dead Queens before I started reading it, but I enjoyed the way it was structured which was a surprise. We follow Keralie who is a thief in the world of Quadara and she steals something that results in catastrophic consequences. While I didn't really care for any of the characters on a personal level, I thought it was neat reading from the perspectives of the four queens. We get to see how these women from very different parts of the world come together and rule harmoniously. We also get to see how they, and the palace as a whole, reacts when the queens start to die off. This adds to the mystery Keralie has to face. But, like I said, I didn't really care about what happened to any of the characters, but I felt like we were supposed to care about Keralie and Varin. I just didn't.


The world was really lackluster. Part of that probably stems from this being a standalone. Even still, this felt like a very generic world. There is also a rather unfortunate part where we find out one of the quadrants kills off people with genetic deficiencies. Other than one outburst from Keralie, this idea goes largely unchallenged. There's even a scene towards the end where the idea of "erasing" these medical problems is encouraged. This aspect felt poorly handled and that's a pity. I think the overall story had a lot of promise, and it's always nice to read a self-contained fantasy story. There were some plot elements I appreciated, but others made the book feel largely pointless.


Middle of the road story that had a decent concept.